Remember when our biggest problems were doctors not taking us seriously and people’s lack of understanding about our health issues? Are you nostalgic for those days? Me too!

If you’re frustrated and overwhelmed by what’s been going on with the Trump administration but you don’t have the energy to deal with it AND make sure you get in all your medical appointments while you still have health insurance, there are websites that can help. It’s not like protesting is anything new for spoonies, right? We’re just used to doing it during awareness month.

The News. There. Is. Just. So. Much. I was trying to read the New York Times and The Washington Post, watch MSNBC, listen to NPR, and read The Guardian and Vox. I gained almost 20 pounds from stress eating. So yeah, you can gain weight on Autoimmune Paleo! I’m still stressed, but now Donald Trump can fat-shame me.

Then I found the perfectly named  WhatTheFuckJustHappenedToday.com. Matt Kiser, the founder, devotes hours every day to reading everything, and he posts easy, paragraph-long news summaries with links to the original articles. He also has a missed-yesterday-catch-up option for when you take a mental health day.

Indivisible Guide and Calling Congress — By this point, you probably have seen The Indivisible Guide, and you know that that calling your senators and representatives is more effective than emailing or signing petitions. If you haven’t read the Guide, I recommend checking it out, because it was written by former Congressional staffers who understand how representatives think. I think some of the suggestions are overwhelming for spoonies and for that matter, introverts. I can call Congress until I’m blue, but organize my own resistance group? Please. I can barely organize my meds.

There are a lot of daily and weekly action apps and sites that make it easy to call Congress. You’re more likely to get through if you avoid calling early in the morning, during lunch hours, or right before 5 p.m.

DailyAction.org  — The app sends you a text message with a short explanation of one issue. When you enter your zip, it connects you to your senator or representative. Very easy. Daily Action also has a book club on Facebook.

5calls.org — This app gives you a list of issues so you can choose what’s most important to you each day. It’s available in the App Store and Google Play. When you enter your zip code, the list of issues appears. After you choose your priority issue, a brief explanation pops up, along with whom to call and a short script you can use if you can’t think of what to say. If the line is busy, the app will redirect you to a different office.

Resistbot — Text “Resist” to 50409, enter your zip code, and Resistbot will send a short fax to your senators. There is no prepared script — you choose what you want to say.  If you enter your whole address, it will find your representative and fax them as well. It’s very quick and convenient.

Facebook Town Hall — Forget Facebook political arguments — now you can make a difference while checking your newsfeed. Find the “Town Hall” tab in Settings and enter your address. You will see a list of your reps, your senators, your mayor, your city council members, and all other relevant officials.  Facebook gives you the option to call them, message them, email them, follow them, post on their pages, and generally stalk them until they actually do something.

Wall of Us — emails four actions per week to your inbox. Sometimes they’re in-person events, but there are lots of phone and social media actions.

3NoTrump — emails three actions a week, also mostly phone and social media. The scripts are more detailed than the scripts on other sites. For example, they will use specific names of bills in the House and Senate. They give reading recommendations too.

This might seem like a lot, but it isn’t that much if you think of doing something a few times a week. I’d like to say I found one site and stuck with it, but thanks to my brain fog and inability to concentrate, I tend to do different things from different sites. If you sign petitions, it’s good to get a separate email address or use an email you don’t use for anything else. (I learned this when my main email got clogged with donation requests.)

4) Facebook Groups:  There are a ton of groups on Facebook and more forming every day.  If you find a group in your area, you can meet people and figure out if there are events you can go to easily. For example, I wanted to attend one of the airport protests, but it was 30 miles away, the taxis were on strike, it was 20 degrees, and the protest was outside. Hello, Lyme relapse? Thanks to a Facebook group, I found a short rally that was 10 minutes from my apartment.

If you’re not sure which Facebook groups are in your area, search the word “indivisible” with your city or state. I like Rise and Resist, which is linked to a meeting in New York City but has nationwide membership, and the Progressive MSIDS Community. And of course, if you join one Facebook group, Facebook will immediately start suggesting others.

If you can go to a protest but can’t carry a sign, consider this idea from someone at the Women’s March NYC: 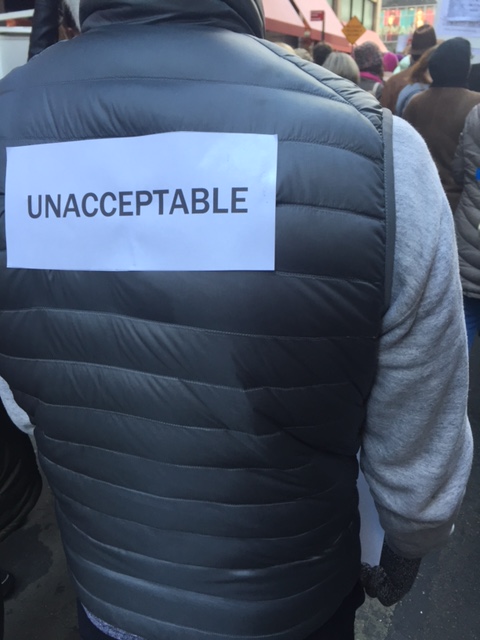 I tried it, and all I can say is definitely make sure your coat or shirt can handle tape. My sign fell off during a rally in a dirty park. Someone picked it up off the ground and handed it to me.  Did I mention I have OCD? Ew.

Last but not least, there is the Disability March site. They did the virtual march for the Women’s March and you can see all the people who participated. They also have links to suggested articles about ableism and other relevant topics, as well as lists of organizations and resources.

Do you have groups or sites to recommend? Please leave them in the comments. And now, here’s a cheery song about the upcoming apocalypse (if you’re receiving this by email, the video might not show).

10 thoughts on “How to #Resist Without Using All Your Spoons”

These are my #topnine2019. I didn’t get as many done as I wanted to in 2019 because of my tendinitis, back injuries, a horrific breakup, and a lot of family issues. It’s very frustrating to not be able to do cartoons about illness because you’re too ill! 🤣 I’m hoping 2020 will be better, although I had a dream that 2020 would be really bad for me but 2021 would be beautiful. Weird! Then again I took a lot of CBD oil before bed that night. Happy New Year everyone and I hope 2020 will be a great year for you. I’m slowly catching up so I will be getting back to doing my regular posts and putting out my artist guest posts. (To the three brilliant artists whose guest posts I haven’t finished, I haven’t forgotten—there’s just been a LOT of stuff going on!) Happy New Year from my sofa where I am peacefully avoiding drunken partiers, yay! #lymedisease #lyme #lymewarrior #lymediseaseawareness #lymedontkillmyvibe #spoonie #spoonielife #spoonieart #missdiagnoses #allergies #mcas
Sending strength and hugs to my food allergy peeps for the holidays—may you all survive your families, lol...”Difficult Relatives of Spoonies, Part Three—link in bio. #lyme #lymedisease #glutenfree #dairyfree #allergies #mecfs #lymehumor #spoonie #missdiagnoses #spoonieart #spoonieartist #lymesucks #lymewarrior #mastcellactivationsyndrome #mcas #foodallergies #foodallergy #foodallergylife #allergyfriendly #mecfswarrior #myalgicencephalomyelitis #lymediseaseawareness #lymedontkillmyvibe #spooniecartoon #lymelife #spoonielife #spoonieproblems #medicalhumor