I’ve never been good at waiting. I’m an anxious, jittery person. I want to know things NOW. I don’t mind when people give me spoilers for my favorite TV shows, because who wants to actually wait to know what happens? I hate cliffhangers and suspense really does kill me. (Speaking of cliffhangers, the ending of this season’s Downton Abbey had far too many.)

But back to limbo. I’ve been trying to deal with my anxiety about waiting by meditating (see Meditation for the Meditation-Challenged, Part One). This week has been hard. I usually don’t post about the everyday details of my life, but there’s just been too much medical limbo this week.

1)Thyroid disease medical limbo – My TSH has been way too high this year, so my endocrinologist just switched me from a Synthroid/compounded T3 combo to Armour Thyroid. But I spoke with the moderator of a thyroid forum and found out that the dose he’s giving me is a bit low compared to the doses of Synthroid and compounded T3 I was taking before. I called the endocrinologist’s office three times, and I haven’t heard back. Was it a mistake? Did he not check my file? Does he start people on the low dose to see if they tolerate the medication, and then increase the dose if they do? Did he go on vacation and just say screw it? What gives? So, that’s Thyroid Medical Limbo No. 1.

The other, more serious issue, is the buyout of Forest Labs, the company that makes Armour Thyroid, by Actavis. What will this mean for the quality of Armour Thyroid? I understand that there have been problems with Armour in the past, but a lot of people swear by it now. Armour seems to be a miracle drug for many thyroid patients. Still, buyouts always bring changes, and I wonder if, now that I finally started taking the Magic Thyroid Pill, the formula and the quality will stay the same, or if the new company will mess it up. I just hope my thyroid will be happy. Because otherwise it will complain:

2) Lyme disease test limbo – Next week I see the Lyme doctor, and I will get back the results of my IGeneX tests. I started seeing this doctor at the end of 2013. A little history: In 2009 I took a standard Lyme disease test and had several positive bands (the bands represent antibodies to different parts of the Lyme bacteria). My doctor at the time ignored the result, even though I was CDC-positive for Lyme. It’s hard to cover the politics of Lyme testing in a few sentences (or a post, or even five posts), but let’s just say the standard tests produce so many false negatives that if you get even a single positive marker it should never be ignored. In 2013, a friend who has Lyme disease convinced me to go to a Lyme-literate doctor because of my positive test from 2009. He tested me using StonyBrook Labs and I was “indeterminate,” and he decided to give me several months of low-dose antibiotics and then retest me, using IGeneX, which is the most accurate Lyme test available in my state. (The low-dose antibiotics is called a “challenge dose” and is meant to jump-start the immune system so it produces antibodies.) The IGeneX test normally costs a ton of money, but oddly is covered by Medicare, which doesn’t seem to cover much. So I’ll get the new Lyme results back next week, plus my results for Lyme coinfections (other diseases carried by ticks).

I will also get back the results of my CDSA test, which tests for bacterial balance in the gut, parasites, digestive issues, malabsorption, yeast, etc. It’s a great test to have done. The awful part is actually doing it. I know this is TMI, but I’m posting this so people who want or need to take this test know what they’re getting into! Basically, it’s an at-home stool test. You have to poop into a container and then transfer the poop to several small jars filled with chemicals. The kit provides a set of gloves and plastic sticks to transfer the poop, but the whole process is still the grossest thing ever. (I’m speaking as someone who has changed kitty litter at least a thousand times.) After you finish, you put the jars into a bag which goes into a box which goes into a special envelope, and then you have to get that envelope to a FedEx and mail it out as soon as possible. If you don’t get it out soon enough you have to do the test AGAIN. When you take the envelope to FedEx, it can be a bit embarrassing giving it to the clerk, because it is packed in a neon orange-and-purple envelope that says HUMAN SPECIMEN ENCLOSED.

I procrastinated doing the test for two months. When I finally did it, a huge blizzard started five minutes after I finished the test, and the local FedEx decided to close early. I was feeling like shit (sorry—I can never resist puns), and there was no way I was going to be able to drag my aching body through a blizzard and get the envelope there in time. But there was also no way I was going to do that test again. Ever. Ugh. In an amazingly kind gesture, J came home early and took the test to FedEx for me. I think he deserves some kind of award for this. How about: 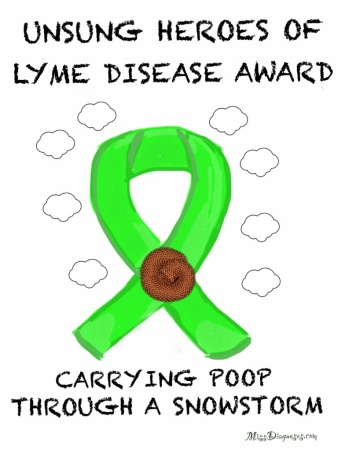 Luckily the FedEx office here has lots of workers, so you can hand a clerk the bright orange and purple HUMAN SPECIMEN ENCLOSED envelope feeling secure that you will never see that particular clerk again. My friend who lives in a tiny town was not so lucky when she took her test: She had to bring her envelope to a clerk she’s known for 20 years. She knows the clerk’s family. She went to the clerk’s daughter’s graduation party. 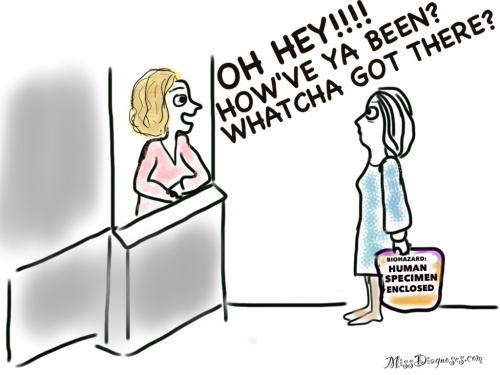 3) Name-brand Neurontin limbo: Lately, insurance companies have been resisting paying for brand-name drugs. Like many people with allergies, I prefer brand-name pills, because I get the same formula every time. With generics, I might get a different pill from a different manufacturer each time I fill the prescription, and while the active ingredient is the same, different manufacturers use different fillers and dyes, so I never know what I might have an allergic reaction to. I hate needing Neurontin because it makes me feel groggy and drugged, but if I miss even a day I start to have burning, stabbing pain. I take the entire dose at night, when it doesn’t matter if I’m alert. But my insurance has just announced it won’t pay for brand-name Neurontin without a doctor’s authorization. The problem is that I get it from a D.O., not an M.D. A D.O. is an osteopath—osteopaths have specialized knowledge about bones, joints, muscles, and nerves, and I haven’t met a rheumatologist who knows half as much as my osteopath knows. Still, I’m not sure if my insurance will accept an authorization from a non-M.D., so I will have to ask my primary-care doctor, who has a really forgetful billing person who loses things. I know there will be a lot of fun back-and-forth paperwork with lots of mistakes. I just LOVE bureaucratic paperwork and spending time on the phone with the insurance company!

4) Hand therapy limbo – I’m waiting to get my next 12 sessions of hand therapy approved and paid for. I have carpal tunnel, cubital tunnel, radial tunnel, and tendinitis that I got from my last job (these injuries are also called repetitive strain injury, or RSI). I had surgery for the carpal tunnel and the cubital tunnel, but I still need therapy for the others. Because these are work-related injuries, I have to get my treatment through the Workers’ Compensation system. If you’ve ever dealt with Workers’ Compensation, you know they’re a nightmare. Their purpose is to downplay workers’ injuries so as to avoid paying for anything.

Recently I had to go see one of my Workers’ Compensation insurance company’s “independent” medical evaluators. These doctors are paid by the insurance company, and they are strongly encouraged to say patients are fine and don’t need more treatment. Still, the doctor I saw wrote in my favor, saying I needed more hand therapy. Despite their own doctor’s having taken my side, the insurance company disputed my claim.

This week, I met with my RSI Injured Workers’ support group, and I got to speak with so many other women who are dealing with this system and its impossible-to-understand, always-changing laws. For example, the court originally granted me several hand therapy sessions per month indefinitely, but the law suddenly changed, so now my doctor has to submit a new claim for sessions every three months.

It’s a broken system. I met someone who is having a problem getting surgery approved even though her wrists hurt so much she can’t shampoo her hair. My hands were that bad when I first got RSI. Even after two surgeries and a lot of massage, Alexander technique, acupuncture, and strengthening, I still can’t use a keyboard or mouse, and I do everything in voice-recognition software. I draw on an iPad because it’s similar to fingerpainting—much less pressure on the hands than drawing on paper. If you know anyone who has RSI but likes to draw, I recommend using an iPad.

5) And the final medical limbo is ongoing: I still don’t know if my fibromyalgia is caused by Lyme, thyroid disease, or if it’s a special entity all its own, and I may never know …

Next week we return to our regularly scheduled programming.

19 thoughts on “This Week in Medical Limbo”